You never know what the day brings…

Well first of all I knew it was going to be really hot.

Then 5 year old Kodi has a virus so He couldn't go to school. Set up with snacks and ginger beer in the boot cup I got from the Dolly Parton roundup. He was propped in front of the cartoons until he felt the need to "craft" (he has his own box in the studio, it keeps him amused for ages.)

He also loves my rubbish bin… "Oh grandma, you throw away the best things"

That's not what his Mum says…..XXXXXXX

The phone rang and it was my Mum in distress. She had a blackout and had fallen. Her health is bad, and I live an hour or so a way, so a number of phone calls and she was whipped off to hospital, her fingers are bruised and she is doing the most beautiful embroidery so she's disappointed that she can't work on it.  Further tests will see what her problem is.

The studio is cool, the air conditioner is old but works a treat so I got a lot of work done in between the visits an the 100 degree heat.

I've mentioned I have white doves… and we now have a love affair between one of our offspring male doves and a fly in… a white dove with feathery feet. They have sat close by each other and kissed under the eaves for the past week, She, the hussy, is shunned by my other girls and pursued by the boys… (typical) so they have decided to reside above the air conditioner in the summer house studio…

So I've set up a makeshift nest hoping Keith won't see it until it's too late !!!!!

We have a 150 ft Gum tree close by and it drops gum nuts at this time of the year… so it sounded like bullets as 100's dropped on the roof in the heat… They smell wonderfully of eucalyptus but I've used the blower and put
them in a pile… now how could I put those shapes in a quilt.?

Late afternoon was a phone call to say that Kodi had fallen and split his head open…. so a visit to Grandmas and a band aid fixed that.

My experiment with my next AgaPAMthus project wasn't too satisfactory either… I used a fabric that is allowing the ink to bleed, so I have to re-do the whole thing..

I dyed the background, drew the images and began to fill them in but it's not satisfactory. 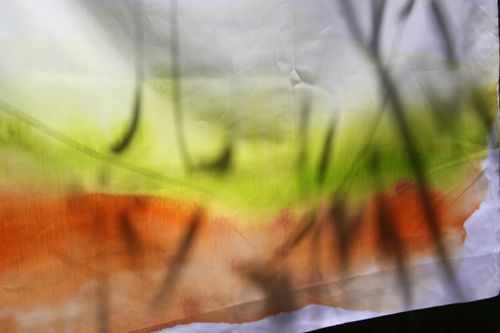 I ruined my outdoor table, the dye won't come out, so now it is colorwash…..!!

I also dyed some fine muslin.

So now I start all over again…

Oh, my daughters dog ate a bird house today and the cats are going crazy because I put fish fertilizer on the pot plants… they are rushing from one to another.

The kid down the back has just got a new electric organ and can't play and her tunes waft over the valley…. (joy) and the Koala in our tree sets up a tune in competition.