Just go with the flow. The adventure begins.

It was extremely cold when I arrived in Ft Lauderdale this morning. I think the  temperature was in the low 50’s.  It was a bit of a shock to step out of the airport and be greeted by a blast of cold air. I know its winter, but I didn’t expect it to be so cold. 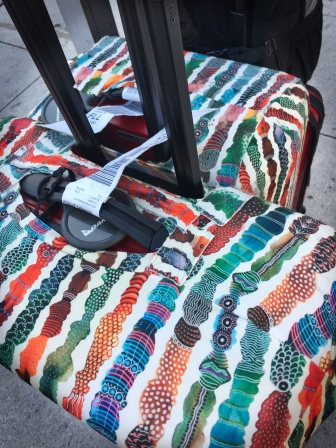 I was told by the hotel that they would pick me up in 20 minutes, so by the time I juggled the cases out to the pick up point I thought I only had a few minutes to wait. Oh, no, try 45 mins specially as the  hotel van whizzed past me because he was waving to his friend rather than looking on my side of the road and I in my wisdom ran down the road after him. No, he didn’t see me. I had to ring the hotel for him to come back. It sure looks pretty silly at that time of the morning. Well I guess it does at any time of the day, but what the heck I was freezing.

The flight had been uneventful. It took four and a half hours from LA and it appeared that we arrived in Ft Lauderdale at 4.30 am LA time, but 7.30 Florida time.

You just have to suck it up and be flexible when traveling. I hope my dismay didn’t show when I was greeted by the hotel manager in a white shirt that was absolutely filthy. I mean, I felt I should pop out and buy him a new one.

I don’t know folks.  – The rest of the trip will be just wonderful. I’m not really whinging  I just say it as I see it.

I grabbed a bite of hotel breaky, and after a shower, fell into bed and slept for 3 hours. Now I feel sane. The secret of travel is to pace yourself.

One of my secrets for sanity and health safety is that sometimes in hotel rooms with a past, I carry a silk sleeping cocoon that also covers the pillow… yep, I had to bring it out today.

I also carry my own quilt! sigh, Pamela.

Miss Jaya, aged 4. did me a drawing to give to the Pilot to keep me safe. I figure that that’s all I need for protection for the entire trip. I love the people with smiling faces, big eyelashes and  holding hands as they fly through the air. The drawing of the plane is wonderful.

I’ve caught up on my paperwork, I have a few more contracts to finish before I can relax over the next few days.

Miss Rose and I walked out for a few hours, we had both not eaten much all day so a local diner did the trick. I love the dear of this diner.

I would love to have one of these in my yard.