On the road in the state of Gujarat.

We arrived at Rann Riders late morning yesterday. It’s a resort of sorts because it is close to the wild donkey area and a lake where there is a lot of wildlife. There are no other guests here right now, tourism is down due to a hike in prices because of high  GST. The GST has been lowered but somehow it prevented Indian tourists from traveling this year.

The 3 hour drive from the city was peppered with interest. First of all the roads are busy and very narrow in the country and there are speed bumps every half mile so progress is slow. I’ve encountered it before, but I always forget about it until you are actually on the road.

We passed fields of cotton and I was able to get out of the car and take photos of it in the field. The temperatures are very high, almost 104 yesterday and I find it hard to see the people working in in that heat. Granted many were resting under the shade of trees at that time of the day.

We arrived at Rann Rider at 1.30. I had worked on projects most of the way. Working on the upcoming Thailand  trip and catching up on writing. I listened to my favourite music and its a little unrealistic driving in such an amazing place to familiar sounds, but I find I focus more only work if it’s channelled by music.

Rann Rider resort is lovely.  The accommodation is set in purpose built huts which are very large,  I had my choice of accommodation and chose one of the round buildings instead of the large house with  two outdoor porch swings. The walls are decorated local style and I need to investigate the ideas further. 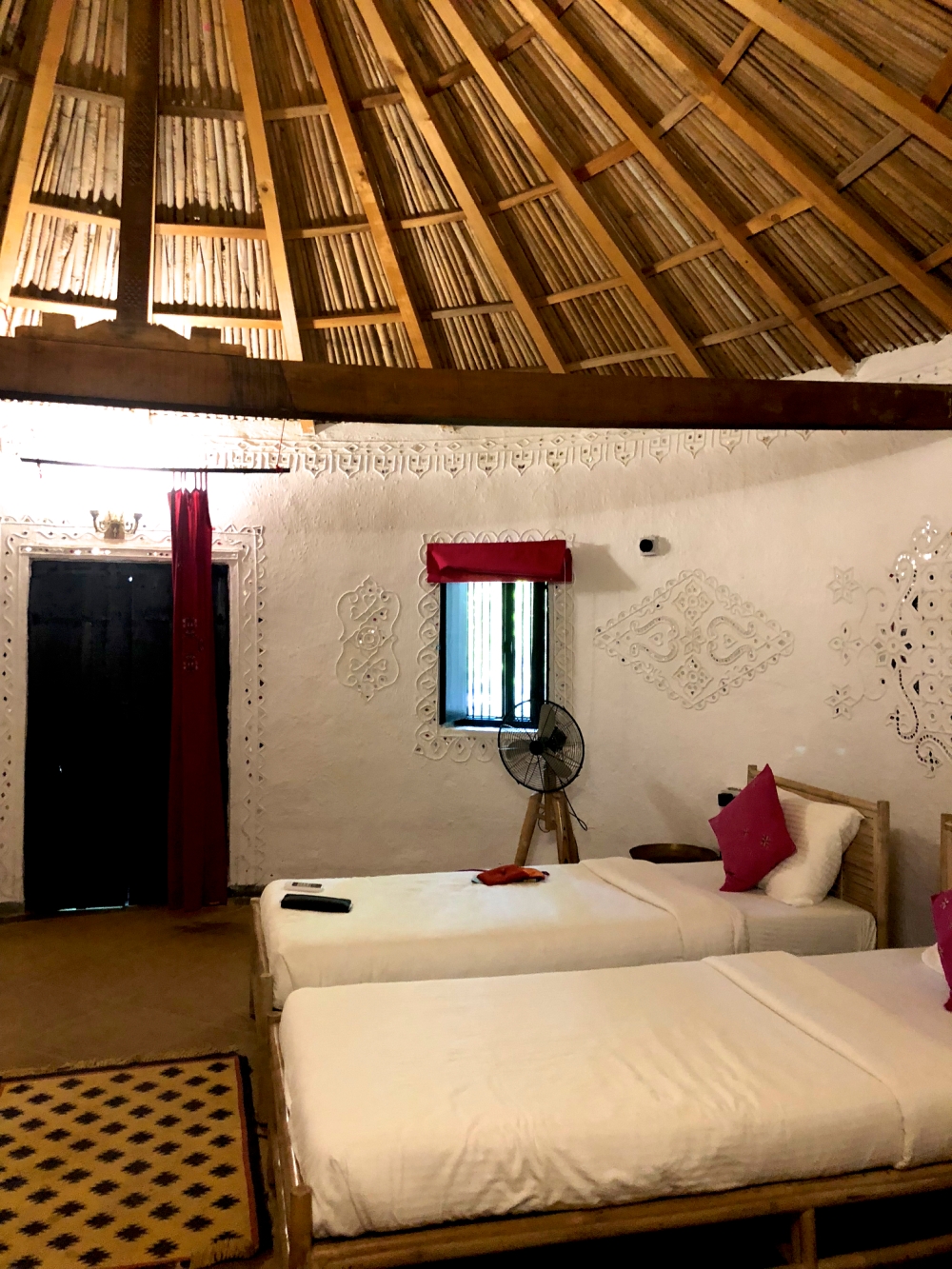 I had time to catchup on work and rest a little before traveling out on the back of a jeep safari style. It  occurred to me that I was an amazing sight, a grand ma and a young guide in a safari truck on an Indian rural road.

We visited a small village known for its intricate embroidery.

We walked down through the towns narrow lanes, visiting with the men in the barber shop, the sweet shop and the local ‘deli’ We engaged in broken conversation and smiles and gestures  to the men sitting outside one of the closed shops.  The children were full of smiles and laughter and the goats greeted us with genuine disinterest. Some of the buildings were tall and painted a range of mild pastel turquoise and purple. The architecture was incomparable.  Just being able to view this locality was a joy to me. I indeed am the first European to visit for some time and my Mexican hat festooned with the small handmade dolls from Guatemala was a talking point.

I will have to add photos later, the internet is not the best here.

I made sure I kept it on my head or it would have been whipped away.

We made a steep turn and mounted a few high steps into a open room dark at the end, a fire in the corner was being prepared for cooking. A woman in her 50’s was sitting on the bare floor embroidering a rather large skirt. I felt a connection immediately and she conversed with me translated by my Guide.

We talked of the embroidery, family and our own art, and she asked me to film the process.

“Sit with me” she said with a smile. Lost in the moment and my heart bursting I did so and filmed the process.

We moved into another room, well I think it’s the only other room other than the roof top. It was dark, the only light is from the open door way and a fan and a bare globe cooled and lit the room in turn.

She opened the doors of a cupboard painted yellow with folk art decoration and festooned in embroidered panels. It was full of art.

One by one she pulled out the pieces and I marvelled at the colors as they spilled on the floor. I chose two of her pieces to feature in my own house. One is an embroidered and mirrored wall panel 20 foot long, 12” wide, tie dyed saris of  a variety of colors make up the 18” x 6” flags hanging from the bottom of the panel. I think it will look wonderful in the ‘special’ kids hangout in our house. I’m going to choose a special silk Sari to make a festoon over the bed and  Tilly and I might try to make one of the patterns featured on the wall in Rann Rider.

The other a bright wall panel embroidery.

I shared some of my work with her and she asked me if I would create a thread painting portrait of her, specially her ear pieces she said.  So it was a delight to take photos and have time to work through the process of composing an image rather than fast snapping.

I promised her that her work will be greatly appreciated in my house and we departed as friends.

We walked back through the village, past the cattle and dogs and continued on to our next adventure. It was almost sunset and the light was yellow…. We come across a village of tent like buildings occupied by a different tribe of settlers. I was warned I would be mobbed and indeed I was.

My guide says most people are afraid in that situation… but I loved it. Each person demanded forcefully that I take their photo.

The children were in worn clothes  and some entirely naked. They streamed from the makeshift dwellings not asking for money or anything other than I be their sister.    Gees Louise. I think they are nomadic and I need to get the formal name of the group.

We spent an hour visiting, photographing and bought some of their beaded products. I wondered how my lovely group would have coped…. You know, I think they would have loved it and I imagined the reactions of each one…. This is a fact finding tour… and I think we need to visit this area too on our textile and photographic tours.

It was hard to leave, but the light was facing and we needed to go to yet another village, so up on the back of the jeep and off into the wilds again.

This next village was similar to the first, narrow dirt roads lined with small square houses painted in muted colors, but in this village the cows had right of way and the people who live here are herders. We were able to see the cows being bought back to their compounds for rest and milking.

We had some delightful encounters with the locals. Most people were out in the street, Some just sitting quietly, the children playing and men and women in groups chatting. I loved it.

My Guide told me one of the old men was discussing the fact that his daughter in law didn’t make chapatis like his wife did to his friend. The sat on a small step outside the house and their conversation was animated.

So that was my day….. more than I imagined and almost too  much to take in.  That’s why I write.