Skip to content
It’s 1.00 am, I’ve had very little time to write on this trip and I snatch precious moments of time and silence.
Time has to be metered and never seems enough, but silence is only attained if I put on my earphones and listen to music. In essence, I can find my own personal silence even in a busy airport terminal.

Tonight I’m listening to The United Choir of the Holy Trinity – St Sergius Lavra.
I has the depth and harmony particular to Russian Choirs. I don’t pretend to know the magical combination… but it is undisguisedly Russian.

I’m a tardy tourist. I like to observe normal life and leave the glitz to those who have less time and more money than I. So our journey today into the countryside was special.

About 100 kms out of Moscow we stopped to visit St Sergius Lavra.

It’s a walled containment of some 8 churches and Cathedrals. 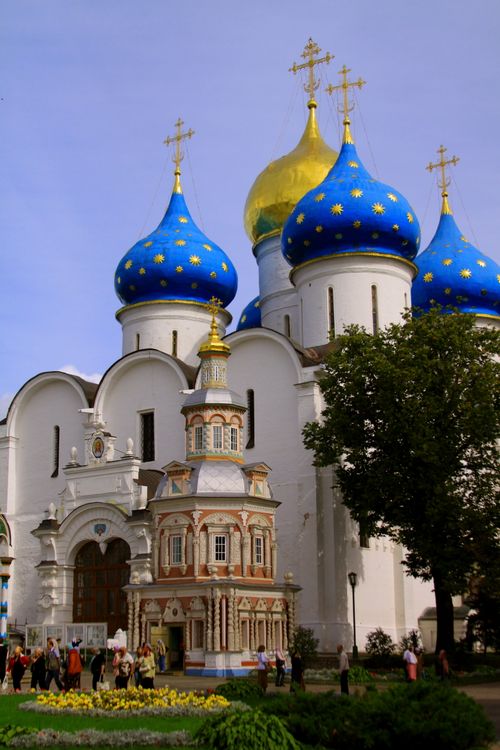 It was a world away from the Mercedes, Jaguars and slick consumables of Moscow.
The colors worn by these two ladies spoke to me of tradition, a culture rich in heritage and my own lack of pious attention.

The entrance gate was the meeting place for acquaintances, there were several old ladies and a young woman with a child who asked for money.

I feel so bad that I carry an expensive camera and wear bling. 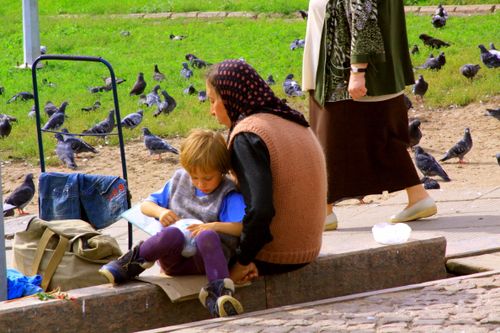 There was a small market, you could even buy furs !!!!!

and  a roosting place in the sun for the 100’s of pigeons. 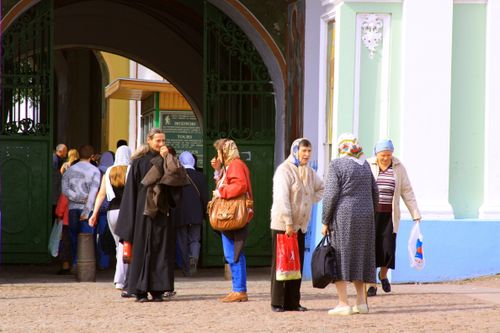 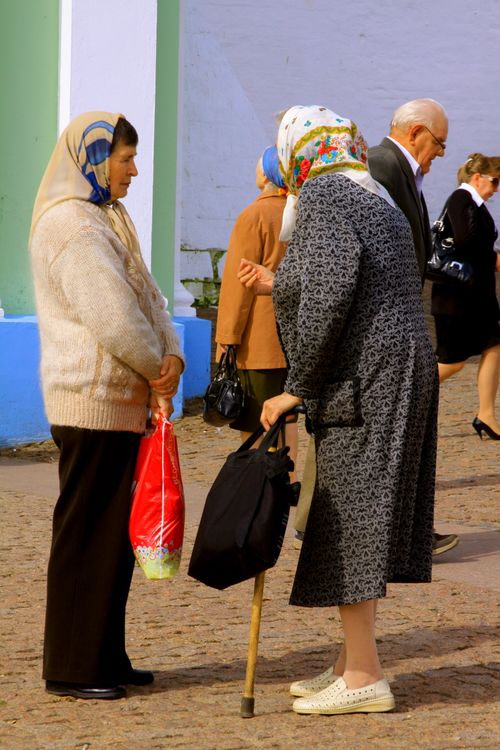 The raw exterior gave no hint of the the decorated walls on the depth of the gate.

Many sat in the courtyard and prayed or just sat and watched the passing parade of people.

Familiarity with the majesty of the gold and bright blue topped spires and the antiquity of the churches is understandable for the local community, but for me it was magical.

There is a fountain that stems from a spring, it is said the water has curing properties. People filled bottles with the water and no doubt took it home to their loved ones. 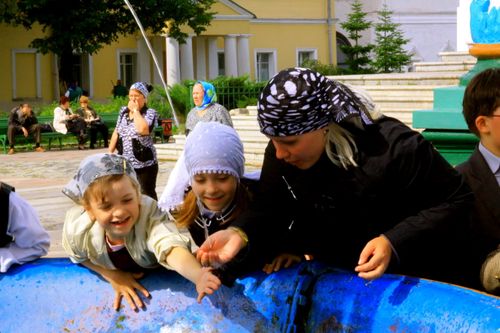 Priests talk to patrons and the soft sounds of a service in process filters through the grounds.

There are no chairs in a Russian Orthodox Church, only a few small highly decorated enclosures on the back wall with just enough room to perch on for those who have difficulty standing.

In the dim light  I noticed 3 women in black dress and head covering standing in file along the far right wall. They sang in harmony in response to the priests dialogue.The walls and the ceiling of the church are covered in paintings and saints look down with with open palms and large expressive eyes. The sunlight filtered through the high windows adding intensity to the frescos and I was enthralled. 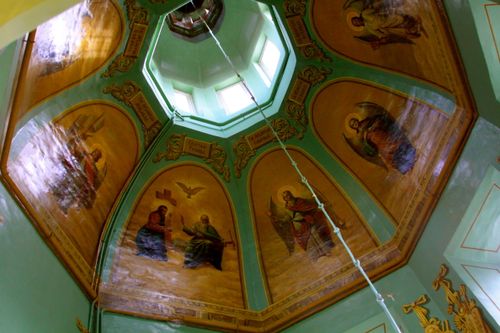 This is a quilted pattern on a church….. but it dates back to the 13th century….

After a traditional lunch, we then went on to Sergies Dacha

The first dachas in Russia began to appear during the reign of Peter the Great. Initially they were small estates in the country, which were given to loyal vassals by the Tsar. In archaic Russian, the word dacha means something given.

Weekends and summer days are spent at the Dacha… and they remain in the family for generations. 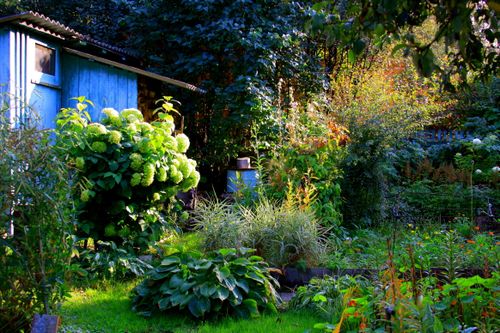 We drove back to Moscow and I slept a little… despite the chaotic traffic.

It's  rather difficult to describe…. but let me say, that in 3 days we have seen 4 rather nasty accidents.!!!