Skip to content
"I've learned that you shouldn't go
through life with a catcher's mitt in both hands:
you need to be able
to throw some things back."

We're moving on to Scotland tomorrow…
I decided to check on our hotel and found that the lift is out of service.
So I contacted the company with my concerns and after a chat online I was able to shift to a better hotel….. They asked us to pay 25 pound a day more, but I pointed out that it wasn't my problem that the lift wasn't working in the hotel….
He agreed with me…. so change we have, for the same fee.

Thanks so much to the Apex Hotel group for their assistance.

For years and years I have accepted everything  I was given… however, you know when things happen that are not our fault… it doesn't hurt to query….

A I mentioned yesterday I was on a 'journey' to find vintage and antique  fabric, buttons and sewing accouterments.

We left the hotel early this morning, the normally bustling Paris seemed deserted… There was no where to have breakfast except Macca's, which was a bit of a come down after croissants and wonderful yogurt at a local cafe, but it turned out just fine…you can buy the same things at the Mc Cafe….
The coffee was wonderful..

We'd been on the train for 5 minutes when I noticed an elderly woman walking down the aisle. I was struck by her strong features and incredibly fair complexion… it appeared that she spent a lot if time indoors.

Despite the warm weather she was wearing a heavy black woolen coat, gloves, a hat pulled well down over her hair and thick black boots. They were expensive and in good condition.

I watched with surprise as she approached several people further down the train and then she came to us and spoke in French. "Sorry we only speak English" I said.
Then I was startled as she replied in a cultured English accent that could only mean she was English. "I need money to get  out of the situation I'm in" she said.

I should have given her something….. (I always do) but I was startled…  I think she took our astonishment to mean a rebuttal.

She went further on down the train and sat down.

Who is she? She looked like she could have been in a movie.
We alighted from the train, I caught a fleeting glimpse of her through the silver and green flash of the windows as the train moved off. She was sitting huddled on the seat with a red notebook and writing intently with her pencil….

Maybe she's a writer, or maybe an artist… where is her family…. does she do this often…. Is she writing about the responses she gets from people.?

Two musicians got on the next train, breathing heavily as they jumped through the door. One dragged a luggage carrier with his sound system duck taped to the base.

He pressed a button and the background began their cue… and they began, a clarinet and a saxophone in unison and harmony.

The music lifted my spirits after my concern for the old woman.

No one gave them money….even after they played Hava Nagila at a very fast pace.

The train stopped, the door opened, they got out and ran as fast as they could to the next carriage to try their luck again.!!!!

What an interesting 15 minute trip.

We found the markets and the elation made me feel better about the old lady. However, now I'm writing about her, it renews my concern.

To find the good stuff you need to wander through the cheap clothes, outlandish handbags, sensible undies and shoes to get to the Antique area. 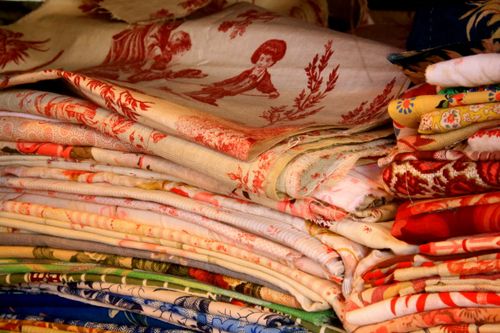 It was hot and we stopped at a cafe for a coke. We chatted to a lady and her daughter from Melbourne who used a very loud voice to proclaim to  the cafe owner. "That was the best dam cappuccino I've had since I arrived in France" she then pointed to us and said "they're Aussies too…." aligning us without consent to her accent and demeanor.

The shop owner, smiled at us in our discomfort and spoke perfect English… "sit all day sir, you paid french tax to do that" (it cost us an extra 50 cents of our coke to sit at his stall)

He generously guided us to the fabric area of the Antique stalls.

100's and 100's of small shops down colorful alleys. Some were full of things that I've only seen in museums, some with things that made my heart race faster.

The fabric stores were outrageously expensive, but worth the visit….

It contained, some black lace, several pieces of vintage cream lace. A small gold satin bag with a gathered base and fragile tortoiseshell handle.  A white "breton" hat, some floral fabric and a small woven bag trimmed with green silk that I will treasure….You need to wander to find the stores… but I have cards from a lot of them… and if you come on my French tour next year you will be escorted there by ME….!!!!

Once again, I'm frustrated at not being able to share vision with you…. but I hope the internet will be better tomorrow.