It’s been a long day.

I was up at 4.30 after a luxurious sleep. There is something about wrapping oneself in a blanket and laying on the settee and watching television. Of course I fell asleep early so the 4.30 am start wasn’t as dramatic as it sounds.

I had organized a taxi through my hotel and the driver was there to meet me when I came downstairs with my luggage. “have breakfast” he said insistently.  “No I’ll have it in the airport” was my reply.

“Sit up front” he offered. So I did, I was in a huge vehicle and I thought it would be the right thing to do. Before we took off the young man patted me on the arm and  I thought, “whoops that’s not appropriate” but dismissed it as being friendly and an African custom. He said he was Kenyan.      Truly.!!!!

As the trip progressed he punctuated each sentence with a squeeze of my arm. Gees Louise, just get me to the airport. I tried conversation, and he got friendlier, actually grabbing my hand and holding it. I got it away in mid conversation and I tried to place my hand in a different position by holding my right shoulder… well that’s darned uncomfortable after 5 minutes…. so let me say, after lots of hand grabbing, offering to take me for coffee and a kiss on the cheek rather than a handshake from my driver, I couldn’t get into the airport fast enough.

The things that happen to a Grandmother. I was a bit worried about my I watch too, but its still there.

I was flying United rather than American as I normally do and trust me there is huge difference. No one to check you in even if you are first class. Only two cabin bags, so I had to jam the hand bag and the iPad in my camera bag and carry on. Now this is dramatic for someone as anal as I. I have to know just where everything is at all times and when I have to shove them into the orifices of my cases in a rush. My husband will tell you, I get crabby.  They ran out of food even in first class  with only 16 people in the cabin and I couldn’t understand a word the flight director said, he whipped  through his spiel  so fast it became another language.

But the flight went well, I worked all the way after eating the very ordinary breakfast.

As you fly into Guatemala city, you see 1000’s of houses settled on top of huge hills and mountains like icing on a cup cake. Its fascinating, I’ve never seen landscape like that before. 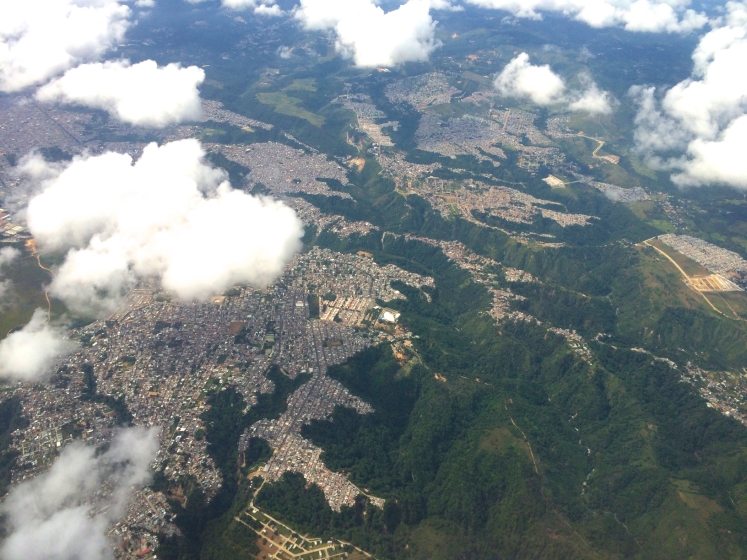 So a word of advice for the group arriving soon. I changed money at the airport in Houston just a few hundred dollars so I had tips etc.

I purchased a sim card for my phone just after I got off the plane in Guatemala before you get to immigration. It cost $24 for a month or $14 for 10 days. You get full data, internet emails etc. The gal will put it in the phone for you. I can do it myself but I let her do it and check that it worked.

It takes quite a long time to get through security after immigration if you are coming in during the day.

My driver was waiting “Pamela Holland” said the sign and after this mornings episode I decided to sit in the back but I did have the GPS on to make sure he was going the right way.

We passed the world on the trip. It took almost 3 hours to go just 30 kms. The traffic is busy during the day but I saw so many interesting things the time passed quickly. I saw washing hung on the foundations of the exclusive road signs, 4 people to a motor cycle, street stalls, markets, furniture being made on the side of the road, just like in Kenya, the winding roads of the mountains and the mist that settled as we got higher.

It was a relief to get to the hotel. The Camino Real in Antigua.

My room is huge and very comfortable.  I even have a small sunny alcove to draw in.

I’m familiar with the layout of the city of Antigua, Jim West and I spent a few days here in June organizing this tour. I was starving so I ventured to the nearest restaurant and it was Riley’s Irish Pub. I had a hamburger and could have even had bangers and mash, but I promise faithfully, hand on heart,  to only eat Guatemalan from now on.

It was great, sitting there watching the world go by.  This morning I was in Houston in a totally different environment. Now I’m in a different world altogether. I walked back to the hotel in the semi darkness, got chased by a dog with red eyes and got into my room with a sigh. 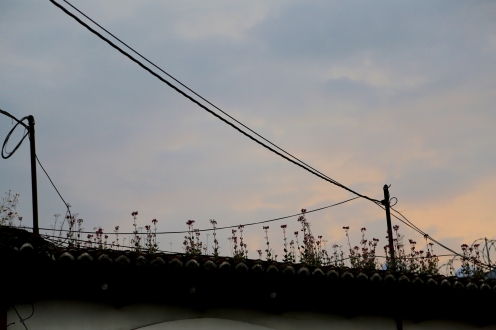